The Tory party have entered yet another scandal in recent week’s. This time Patrick Mercer was caught undercover exposed for ‘cash for questions’ in which he was shamed for levels of near bribery and corruption.

Being fully caught out, the Tory politician decided not to muck about and put out a strong appearance for the media, quickly admitting his mistakes and taking responsibility. This was done because their was no other way and is an attempt to look like he is playing ball or saving face, as it were. While some can respect the fact that he took responsibility instead of other drama’s including the Maria Miller scandal of dithering to resign, the Tory did so only because he was so caught out there was no going back.

The scandal now unleashes yet another damaging amount of proof that corruption is rife in a conservative UK government and can not be trusted. Politicians can always get away with it. Mercer plans to quietly return after a six month, yes MONTH return. The £65,000 earner will come back for an estimated £71,000 pay increase.

Some high-profile scandals include Maria Miller, Theresa May, George Osbourne, Jeremy Hunt, Iain Duncan Smith and Grant Shapps with an alleged affair with another Tory MP over his wife. David Cameron has also been involved in many scandals believed to be allegedly covered up. Cameron has attempted to regulate the press with all of the above ministers on his front bench, who are also his friends. Cameron has also attempted to cover up such scandal with human rights abuses, legal aid refinement and evil welfare reforms. He has a barrister brother. Only this week, his brother told him his legal aid abuses were “unfair.”

Now the story develops much more interestingly. Nigel Farage, leader of the United Kingdom Independence Party has “shown interest” in campaigning for the by-election for disgraced Mercer’s vacant seat.

Our advice to Farage is clear. If he does not, send another candidate to go for it. This is the time, at the height of your momentum with voters to launch a chance to go for the seat. If UKIP’s profile is high in the region then there is high chance with good campaigning that they will take the seat and represent resident’s they way they like. Farage is someone who public’s feel very connected to. But Farage will have to nail down his policies more clearly and set an agenda other than UK Immigration as its primary concern. 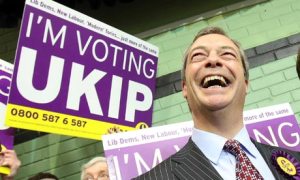 In the right area of the UK, Farage would win votes. They just have to figure out where that area of the UK is, and if Farage, or some other UKIP candidate, is ready to take this challenge. The longer they dither, the most momentum they will lose. Acting fast is crucial for UKIP, a party that has no strong politicians and connected publics that require a seat in UK Parliament based on the ever conflicted and disparaged views of the electorate.

The Tories are the party always heavily involved in heavy cash pilfering scandals. They only have themselves to blame.