From the BBC, stolen by The Telegraph from here. Shameful.

In respect to the Women of WWI the professional’s led a washer woman ensemble with Iveta missing her charming Anton. The boys later joined the fro in a great joint dance routine.

Tess Daly and Zoe Ball relay the results once again. Zoe rejoins the show as Claudia Winkleman is away since her daughter suffered burns on a Halloween party night out earlier int he week. FalseFabs wishes them all the best with their recovery.

The results are in and only nine couples will make it to the dancers epicenter of epic proportions, Blackpool. Making it through, in no particular order are – Frankie and Kevin. Also through are – Sunetra and Brendan, Steve and Ola, Mark and Karen. The first to grace the danceoff is Alison and Aljaz.

Operatic sensation Katherine Jenkins sang a beautiful rendition of a 1940’s classic with grace and serenity.

Jake’s Rumba arms were under Len’s critique. Darcey explained the leg stand revolution from her first ten given to Pixie. Sunetra’s gaping was discussed by Craig who wanted them to be conjoined. Bruno’s lunatic animations were looked at, leaving Len ducking for cover from Bruno’s arm wafting.

News Flash. Tom and Jerry are getting Strictlyfied. They”ll help Children In Need as well by making a cartoon of the judges.

The rest of the results return now as the next couple are through. It’s Judy and Anton! Also though, in no particular order is Pixie and Trent, Simon and Kristina. The couple entering the dance off are Caroline and Pasha, leaving Jake and Janette to sail into next week.

Start part, as stated before looks more like a Rumba, however routine was smooth, graceful and floaty. Got that Gabby Logan knock tonight. Easy to see why she landed there though as didn’t seem too oomphy even in a slow dance.

Never Had a Friend in Me – Robin Williams/Aladdin Theme 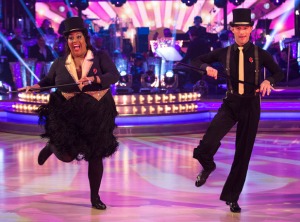 Great cane to and fro-ing for the pair of Aces in the pack. Big girl Alison proves ability to go with rest of them but has landed in dance-off due to hunk voting and old-age faves instead making mockery of show. Great showbiz once again with sheer razzmatazz!

Craig – Best dance in dance off. Caroline and Pasha.

Len – I did agree. Caroline and Pasha. 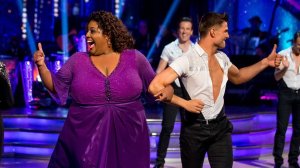 Alison receives a standing ovation. Alison said of her time on the show.

Caroline smashed it. Want her to get to the final and win. I’m still coming to Blackpool. Had absolute ball. Don’t care what colour you are, what size. Absolutely rock it.

When I got ya from day one, I thought I’d won. Genuinely love you as a friend.

Partner Aljaz had an equally glowing endorsement of Partner Ali.

Sir Bruce Forsyth will return on the special themed Children in Need show with Tess this Friday for charity.