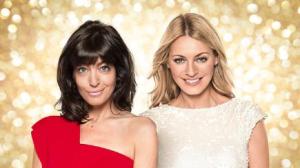 Strictly Come Dancing returned for its glitzy new series. After its legendary host Sir Bruce Forsyth choose to retire from the hosting event only hosting at specials and charity versions of the show instead, he handed the reigns to a new presenter.

Joining leading lady Tess Daly is the smoothly charismatic Claudia Winkleman. Dry, different and contrasting, Claude adds a new touch to the precedings. Can it survive on a two lady presenting format? Time will tell, however there have been some critics of the same sex duo formation.

Beginning the show is the first set of celebrity dancing stars over Friday and Saturday. Votes will be carried over to the next weekend after this formal introduction to the dancefloor for the unwitting celeb trotters. 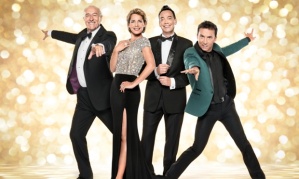 The four wide eyed judges are back and will score the shows tonight and tomorrow, which will roll over to the next week, where eliminations begin. Judging once again are Craig Revel-Horwood, Darcey Bussell, Len Goodman and Bruno Tonioli. Our score will also be given in brackets.

Can You Feel It? – Jackson Five 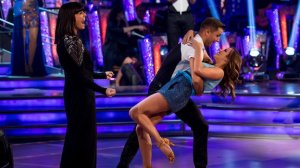 Man-eating unprofessional minx Caroline Flack used to present SCD’s rival show, The X Factor‘s sister show, Xtra Factor. She also slept with some of the guys from the show, including One Direction’s teen star Harry Styles.  Now she’s with Pasha, who is in a relationship with last year’s partner Rachel Riley.

The fantastic Dave Arch Orchestra received a warm introduction too.

The Judges had their say. 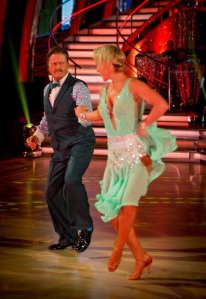 Setback with injury just before live shows last year, Natalie Lowe was ready to step up again. This year she was given antiques expert Tim Wonnacott. At 61, Tim is actually looking quite decent on paper as a lively trier, but is it enough?

Bruno – Appreciate your sense of confidence. Technique is difficult to define. Needs a little bit of work. I really enjoyed it.. I’m crazy. so you know…

Craig – Stiff of hip. Knees bent throughout. Be aware of free arm. Not very good start.

Len – Mustn’t step forward on you heel in the Cha Cha Cha. Full on with personality and gave it everything. Well done to you. 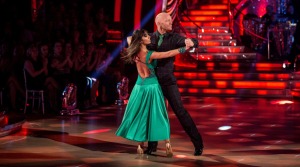 Surprise pairing Jake and Janette looked like a great couple with enthusiasm. Dazzling in her debut last year, Janette took to the floor with Jake. Would the skill match the partnership? Jake wanted a parter with “No nonsense.” Janette added ” I dont liek to fluff around.”

Darcey – It was cool. Looked so comfortable in that Tango.

Len – That was far better than expected. Great body contact. Had spirit. Thought it was terrific.

Bruno – Tough, strong. Would like to see your softer side as well. 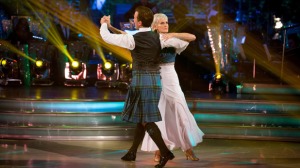 Up next is celebrity Judy Murray. Who? You know her. Not seen on any television show, drama or media. Though her son, Andy Murray is a tennis player and Judy gave him some coaching tips. So, ‘Tennis coach’ Judy is with us this evening/series. Anton DuBeke doing his traditional role of Samaritan in Help The Aged. Since the Scottish referendum, Judy and Anton got into tartan clothing with Anton in a kilt.

Good spin round, held by Anton. Man on bagpipes gets a clap taking away from dance. Slow, empty steps as Anton talks to Judy. Lost and labored now. Awkward turn around. Easy spin around again. Walks over to rock to sit on. Will no doubt get sympathy votes from the grannies for a few weeks.

Darcey – The Waltz is about moving effortlessly. Nerves were coming through. Bit edgy. You shook a little bit all way through.

Len – (Jokes about Anton’s kilt raised) Footwork Mull of Posture more Mull of katorny. Its only a witticism. Don’t start all that. (To crowd) Don’t worry Murray, Cha Cha next week.

Bruno – You look absolutely beautiful. New experience, got the taste, enjoy, next week be better.

Craig – Was on edge of my seat. Dragging Judy around a little bit. Arms out of hold need serious attention. Posture is really appalling. You came out and gave it ago though. Well done on that. 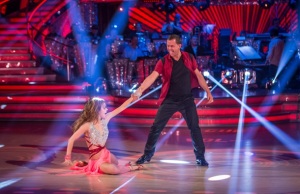 Stereotypical DJ Scott Mills danced to a trade specialty. Being a DJ, it was only natural. Did it rock? Paired with a new dancer on the show, also the sister of Kevin, Joanne Clifton adds enthusiasm. Robbie is also Scott’s friend! Whatever.

Robotic symphony with cheap and empty arm movements. Horrible feet starting. Clumpy. Sneaky Jump up lift unnecessary. Easy spin around of Joanne. Slow on the spot turns from Scott. Through legs slide of Joanne set up by herself. Great start from Joanne, but terrible for Mills.

Bruno – Got the club vibe going. Robotic, neurotic, the euphoric. Vibe was there. Didn’t travel down to the feet. Ryhtymicality of the timing.

Craig – A zimmerframe darling has more movement. Stompy. Like having a tantrum. Dont think its going to be a dance for you, quite frankly.

Darcey – Maybe on a nightclub, not a ballroom.

Shake It Off – Taylor Swift 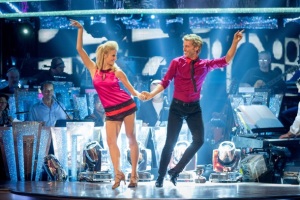 Good spritey beginning but loose tittering around. Looks like both are dancing two different dances. Very watered down. Good spin around on floor. Too amateurish and juvenile even if it is week one.

Bruno – Loving the sixties look. Like Lolita does the jive. Work on sharpness.

Craig – Really enjoyed that. Timing great, energy. Working floor too hard. Slight hesitation in center there. Something odd. It was great.

Darcey – Armography great. Could have sold it bit more to me.

The show continues tomorrow, where the rest will dance. We will also give our view on all things Strictly.

Injured dancer Robin Windsor was removed from the line-up as a result and gave Trent a starring role.

Mr. Chicken Fillets Artem Chigvinstev left the show after a visa application expired in the UK. He has since been snapped up by the US version of the show, Dancing with the Stars.