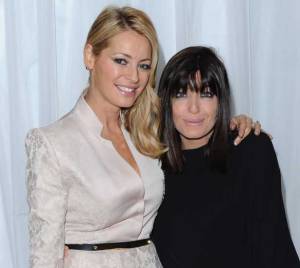 Tonight’s glitzy results come live from the Blackpool Tower. The first couple making it through is – Susanna and Kevin. Also joining the show next week is – Abbey and Aljaz, Ashley and Ola. The first to grace the danceoff is – Mark and Iveta.

Music of the night 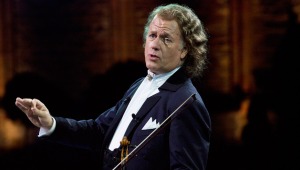 Added with a tender routine with Anton and Iveta, Andreu Rieu gave yet another stunning performance without one note improper with his own orchestra. Flawless once again.

More round up came from the protruding lens. Nothing of interest was seen.

The rest of the results are revealed now by Tess. Making it through in the second batch of results is – Patrick and Anya, Sophie and Brendan and Natalie and Artem. The couple joining the bottom two for the danceoff is Fiona and Anton leaving Ben and Kristina homefree to next week. 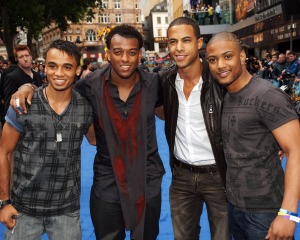 The fourpiece boyband gave an extremely shouty and awkward song added with Marvin’s awful miming on offer. It was off key, had weird staging and was trying so desperately to have an electric sound which should not have been attempted. The R’n’B pop band should not do something they can’t handle. They are then overexposed as now. It didn’t work. Oh. And that Marvin is presenting Series three of The Voice UK soon. Now it become all so clear why they were there.

Mark and Iveta dance off against Fiona and Anton. Both performances were once again the same as their performance earlier, however both looked more at ease this time round.

The vote has put both couples on equal par. It’s a tough call as to who should go. Fun with Mark or give Fiona another chance.  All in all, we would choose Fiona, ultimately to stay but its tight. To improve she needs to really go for it without too much seriousness in step approval. 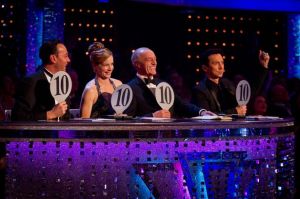 The judges now vote. In the event of a tie head judge Len, as always, will have the casting vote.

Craig – Couple I would like to save, Fiona and Anton.

Bruno – Couple like to save is Mark and Iveta.

Len – (Now has the deciding vote) – Very close thing. Gave them both 8’s. Danceoff you up your game or nerves. For that reason I’m going to save Mark and Iveta.

Bond Girl and Author Fiona Fullerton flutters away from the show. Fiona said of her parting ways the show was “like being a guest at the best party in the world.” She tanked Anton for being “unbeleivably patient.”

Anton gave praise to his golden-eye. “This show is made fun by the people we get to dance with. Lovely.”

Fullerton left with a grateful and cheerful end to the Strictly experience. 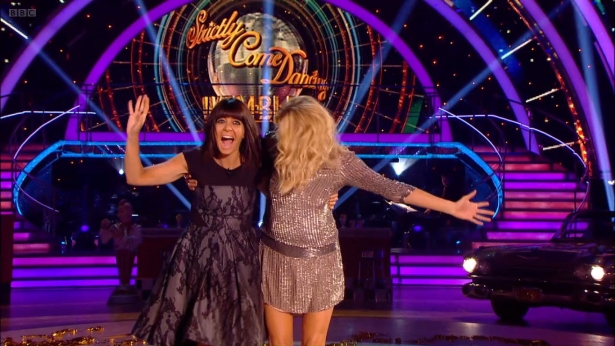 After the performances and backstage feel from the dancers, couple and judges, “the scary spotlight” cometh Tess informs.

Safely through to next week are – Louis and Flavia, Lisa and Robin.

First in the dance off – Michael and Natalie. 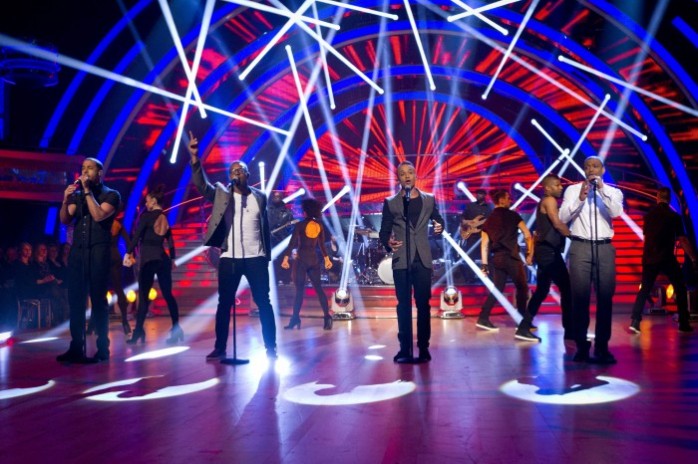 Smooth, tender R’n’B love song from the foursome whilst maintaining a dapper sense of style and originality in attire, also showed their maturity in their performance.

Fabulous piece of equipment versatile, able to do dust work Bruno claims, but no Fern return to sweep the floors.

Bruno of his chair again.

Shortly we head back from Claude to Tess for the rest of the results.

Also making it through to the next week are – Denise and James, Dani and Vincent.

Couple dancing again in bottom two are – Nicky and Karen. 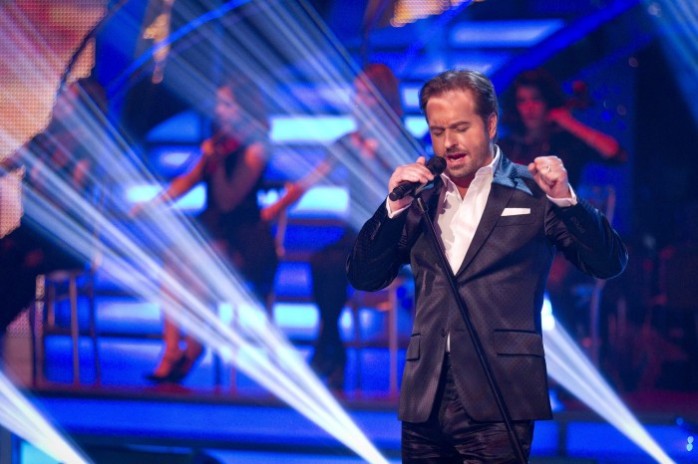 The smiley eyed former mechanic with worldwide success gave a powerful rendition of a classic track adding tone and charisma to the vocals whilst joined by dancers Artem and Aliona. Ending on a powerful and supreme note with pure essence.

Mixing two dances into one. Its different, but also very risky to removing fan base. The group elimination dance was fun, lets bring that back too. It may need something new, but this seems rather pointless. We hope were wrong, but… we shall have to see.

Mechanical arms and good twirls with minor hip action trying. Good legs side to side. Limp in energy slowing down. Arm extensions fair but flimsy on end. Rather loose in part and devoid of enthusement. Good effort, beaming smile and feel of having a go yourself.

Creeping up on Karen, side to side quick feet remain good. All a little slow and uninteresting. More attack of a paso doble than Tango. Good spin around lifts carried by Nicky. No qualities of Bond, every bit boring. Slight improvement but still off in parts. 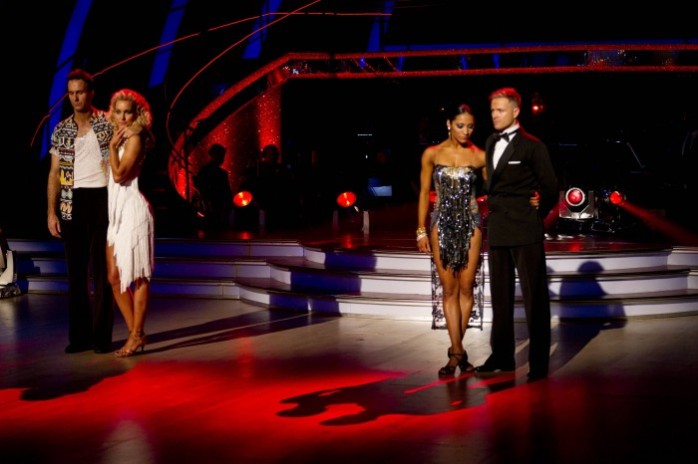 Darecy – both upped game tonight, but save Nicky and Karen.

Bruno – really have to go with couple with License to thrill, Nicky and Karen.

Len – It was unanimous, Len agrees.

Michael Vaughan – “thoroughly deserved” he said of friendly rival Nicky going through. “Had a ball, (Nat) this is the real winner” he complimented his dance pro Lowe.  Natalie responded – “So incredible” of cricketer Vaughny.

Taking their last dance Michael and Natalie will be missed in the completion, adding fun, beaming smiles and blokey joy to all looking. 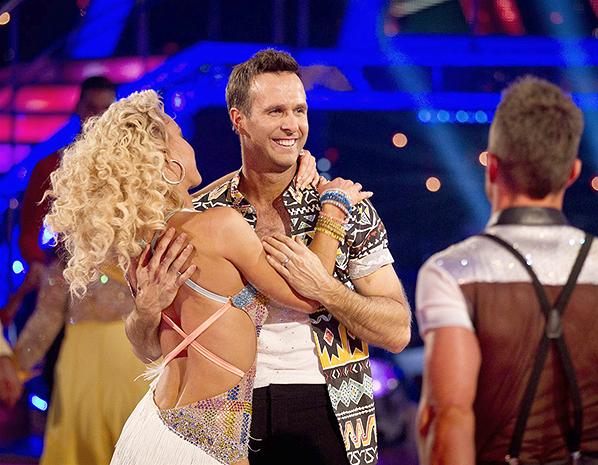 Now the competition is getting very serious. All are ‘strong’ candidates, which will see a few weeded out soon enough. Dance Fusion’s begin next week. 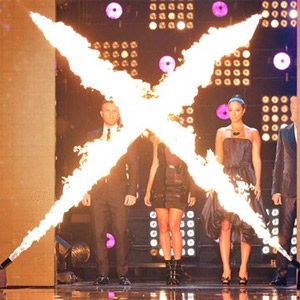 After judges introductions and the satin shimmer of dresswear from the ladies, no patch on Cheryl/Dannii Minogue’s style wars, despite Tulisa and Nicole’s attempts.

Ella tough start. Ryan over trying, Kye good. Jade strong , The groups all sing together one line to protect all flaws in union J and District 3. James pleasing. MK1 fair. Jahmene handled a couple of lines OK, though still anxious. Christopher sang confidently as Lucy looked naked without her guitar. That’s why she needs to find her feet without it in the group song.

With a smooth, crisp sound from the 88 keys and duet with Emelie Sande, Labyrinth provided another corker of a tune. Sande was equally important to add perfect tone together with a stunning backdrop of a snowflake lavalamp on screen staging.

Asking judges who faced danger zone, Gary and Louis agreed Jade may suffer from her vocal difficulties due to illness. Nicole said Christopher Maloney as Tulisa abstained in another pointless decision having her as a judge who cannot give a decision.

Dermot then introduced JLS with their new single. Neglecting to announce their “new single” title…

Hottest Girl in the World 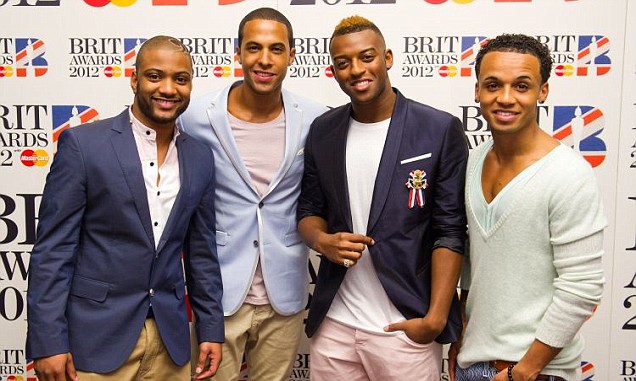 Homegrown band JLS returned to perform a good stage presence to show how it is done with style. When quizzed Aston and his bandmates felt their favourite act so far was James Arthur.

Announced in no particular order who made it through to next week were – Union J, Ella, James, Rylan, Christopher, Jahmene, District3, Lucy, Jade.

Everyone focused on protecting Christopher, favourite to leave, meaning they forgot about Kye also. Both should have made it through but it is clear, many are not voting in the overs group which therefore now deems the show pointless and childish as X Factor have lost the elder market. Seeing mature people with talent leave week in week out shows that X Factor’s audience, based on teens alone, means there is no place for the show anymore. 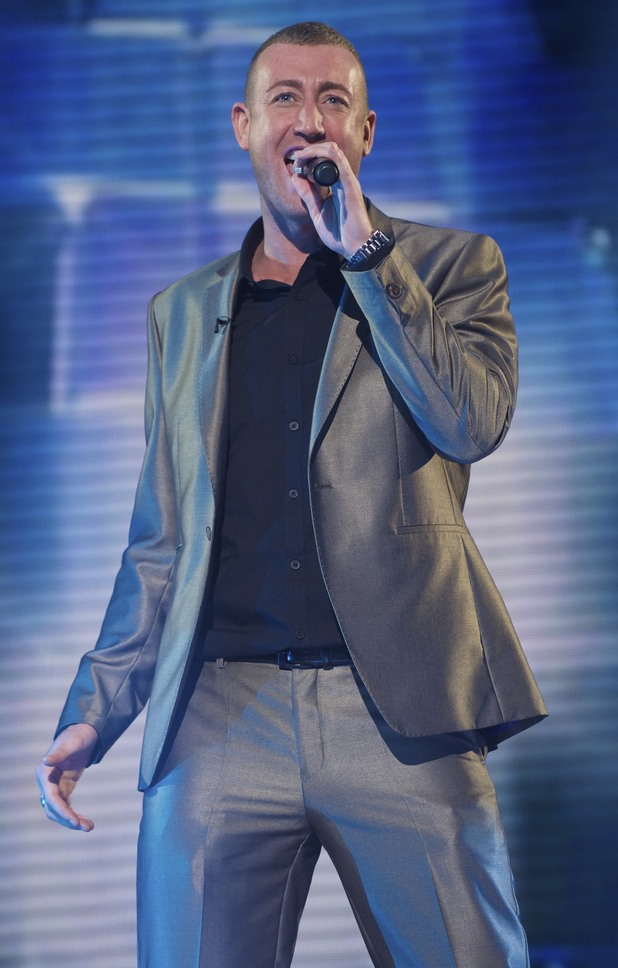 Welcome back the Mickey Mouse club!

The man who can’t be moved – The Script

Fair but pitchy. Very off in vocals together after the rap segment. Over singing one another and didn’t work together as they had hoped.

I can’t make you love me – Adele

Battling the flu, not revealed in his Saturday show as a cheap method to remain in the show, Kye gave a smooth, charismatic and beautiful tone to his vocals from the offset showing what a singing star he is. No one knew of the flu, because he still sounded decent with it. Now that’s talent in abundance. 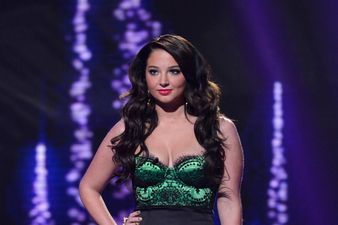 Louis sending home Kye. He managed to say this very quick this time.

Gary – one of the best sing offs in the show. Sending home MK1.

Now the real votes once more. Nicole votes to send home MK1 based on sing off performance.

Tulisa – MK1 reminded me of NDubz, connected with you, Kye amazing performance. NDubz song, “if I don’t stick up for my roots.” Opts to send home Kye in another travesty of misjustice. Voting on a personal feeling once more and not a professional vote highlights how inept the juvenile Constostavlos is on the panel that is supposed to vote based on singing not feeling. Has no place on the show, and highly devalues it.

Act with the fewest votes leaving the contest is MK1. They were on borrowed time, as are all of Louis acts.