Sadly this past Sunday there was some bad news as a man who crossed the gruelling 26 mile and 385 yard race across London collapsed and passed away after reaching the finish line. Later named as fundraiser and IT expert, Robert Berry, 42, who was said to be running for his mother. She had been diagnosed with brittle bone condition twenty years ago. Donations have now surpassed the original target of £1,700 to £60,000. Donations are still available to be made on his JustGiving page.  Berry, was rushed to hospital where he later died.

Co-event organiser Hugh Brasher said “We did very unfortunately have one death of a runner, who had finished and our thoughts are very much with the family and friends of that runner. Overall it was a fantastic day but always a little bit of sadness when something like this happens.” 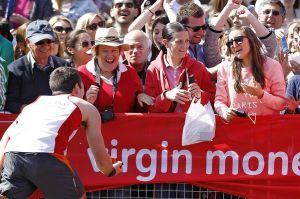 Well in opposition to this there was some good news too. Another racer who passed the finish line from the capital trek couldn’t fully kneel. Though he did manage to produce a ring for his now fiancée at the finish line with a marriage proposal. The proposal came from Alex Prior, 25 to his girlfriend Jess Seldon, 27. Shocked and thrilled Seldon accepted. Project manager of the Football Association Prior said “I had a speech planned but it was so loud and I was so tired everything went out of my head. It was surreal – I had to text her to ask if she had definitely said yes.” He completed the race in three hours and twenty-three minutes. Onlookers were embracing the joy as the ring was presented. 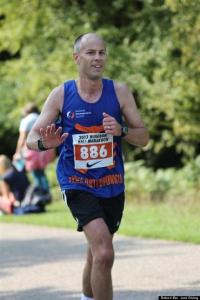 Runner Robert Berry, who sadly passed away after the event.

The annual cultural sporting event, which involves runners from the world over, is due to begin its 35th year in 2015.