The thunderous missile that is Usain Bolt jetted down the 200m strip on the Athletics track to grab the gold at 19.32, maintaining his defending record and now double gold champ , days earlier retaining the 100m also.

Jamaica’s jovial expedites with extreme celerity followed through in second and third as Yohan Blake swiftly clocked 19.44, as Warren Weir charged a time of 19.84. 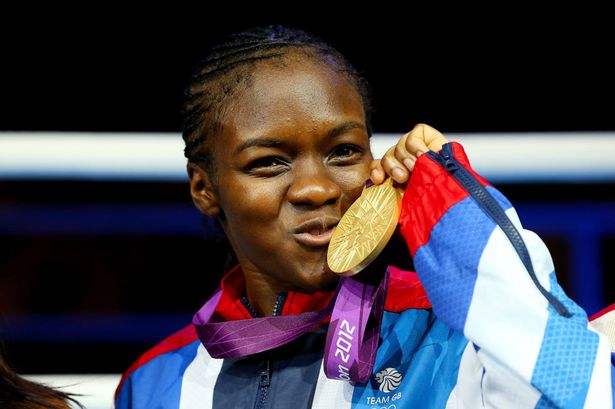 Natasha Adams became the first female in Olympic Boxing to earn the gold medal, for Great Britain, no less, in a hard slog of hardcore bashing.

The beaming young beaut, in the 51kg roundup, was unaware of her points during the bouts and remained focused stating she took “nothing for granted” while choosing to stick “to tactics.” Hard hitting Adams allowed her fists to do the talking; voicing her passion, where gold was her honourable prestige. She named her inspirations as Sugar Ray Leonard and Muhammed Ali. She defeated Ren Cancun of China.

Comedy gold with Dara O’Brien, who was in the crowd on live commentary with a female anchor, as Ireland’s Katie Taylor defeated Russian Sofia Ochigava, 10-8, to lift gold in the lightweight division.

Jade Jones continued the success for Team GB, advancing to the finals of the Taekwondo -57kg events. Battling Hou Yuzhou of China, the Welshwoman suffered a brief ankle pain due to the attacker’s numerous lowblows, where Yuzhou gained an orange and two red strikes to her name. “Team GB” echoed from the crowd in support of underdog Jade, leading 2-0 by the second round. Yuzhou soon had a shin-anegans of her own when she suffered a brief and less painful attack than her opponent, where she had her trainer spray the leg and massage her to stall for time to strategise. Jones simply got up and on with it when she fell earlier, despite the pain with brave integrity.

Shortly on China accumulated two red strikes in the next round. She lost a point by referee as GB went 4-0.

Jones gained a red at 4-1 then a quick 5-1 in rapid succession. China staged a comeback charging to knock down in the third round, with high kicks earning an orange strike and score at 6-2 to GB. Swiftly becoming 6-3 with 10 seconds left, two red marks were added to China as Jones held on at 6-4 to win Olympic gold in a tense and inspirational victory.

Frenchwoman Marlene Harbois and Tapei’s Tsenhi Chong both duelled to bronze, congratulating their peers and Jones in a well-respected portrayal of the sport and dignity. 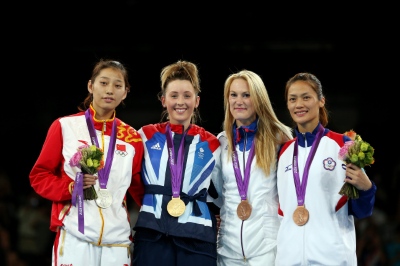 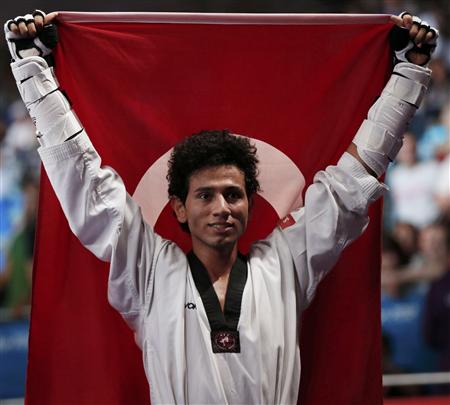 Servet Tazegul challenged Iran’s Mohammad Bagheri Motamed in a competent clash which saw the Turkish Tazegul instantly launch on offence. As round one ended both were 1 a piece.

Round 2 began where the score changed rapidly ending the round at 3-5 in Turkey’s favour.

The final round saw Iran catch to 4-5 as Turkey distanced a 6 point lead almost instantly afterward. At the closing 5 seconds, Motamed attempted a roundhouse kick in a trying effort at 5-6 until the battle ended with Turkey winning the gold medal.

Iran then had the sheer gall to discredit the match and its integrity by attempting a challenge after the ending to mar the process, which was clearly a non-sensical decision as Turkey clearly won. Iran’s coach instantly jumped up on the final second, seeking a headshot claim, which was neutered. Turkey won gold in a respectable effort, as the opposition’s coach ruined the process with an embarrassing call. There is such a thing as bowing out gracefully with your integrity intact. The challenge was unnecessary.

Terrence Jennings and for Team USA and Rhullah Nikpah of Afghanistan shared the same podium side by side to collect bronze in a successful sporting challenge.

Martin Stamper had a close chance, but fell short of the final three. 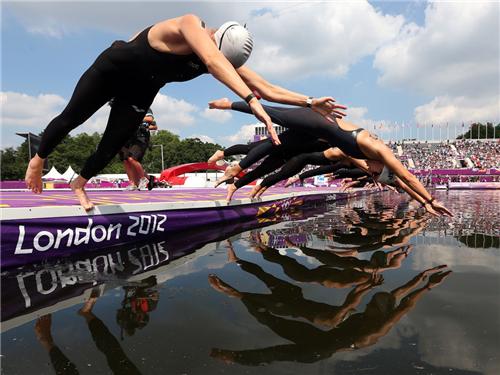 Drinks for the part time mermaids were available at checkpoints, dangled over rods, indicated by flags for the participants, classed by many as “mayhem.” 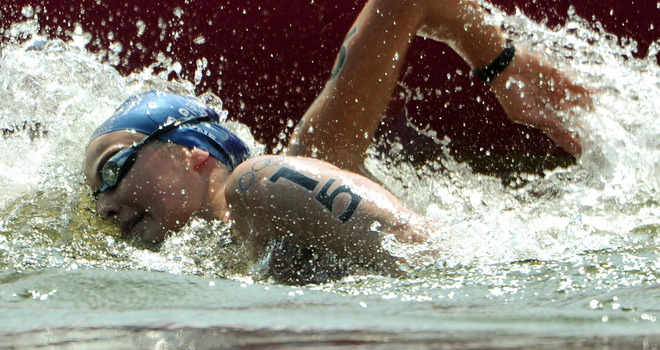 Christian Taylor, 22, won the event with a 17.81 score to fellow American Will Claye who took 17.62 in a close call as Taylor held the gold over his silver counterpart. Bronze went to Fabrizio Donato of Italy on a score of 17.48.

Ashton’s often set high bars for themselves and have integrity, wit and poise in doing so. So with another ‘Dean’ on ‘Ashton’ Eaton proved to hold all of the above and a little something extra. That hidden nugget he shan’t reveal so easily. Being one to look over your shoulder, Eaton stalled all competition to win the Decathlon for Team USA with 151 points then racing the 15.00m at 33.59 seconds to secure the gold medal. Overall score accumulated was an impressive 8,869. Agility, depth, charisma and dedication to succeed make Eaton the all round greatest athlete for our generation. There is always one hidden talent in every field of their profession. Can you spot any others, currently? 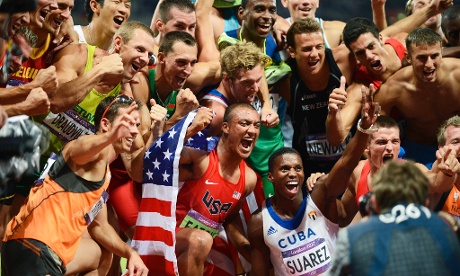 Eaton celebrating with all athletes in a great display for Athletics

Germany topped the Beach Volleyball to gain gold in a deserved effort of play. They downed Brazil 2-1. Latvia took the bronze medal. 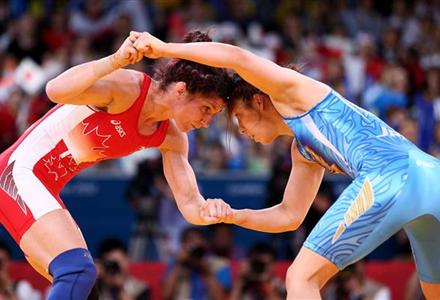 Olga Butkevych, Britain’s ONLY entry in wrestling, without any male’s neither, suffered defeat from Lissette Alexandra Antes Castillo.

After her six minute loss she said –

“It’s my big competition, once every four years. I’ve been competing every year for the past four years.

‘But this year, the big year, I lost. I didn’t feel pressure from the crowd, but was proud to be there for them.

“There were so many people here to support me and I’m proud but sorry.”

Questions raised on her citizenship to Great Britain, gained in May after arriving four years prior from original native country Ukraine has been hounded by the xenophobic Daily Mail newspaper.

The issue of citizenship was not the issue, but lack of Olympic wrestling hopefuls, where funding given in the form of 1.4 m pounds, producing at least three athletes was not delivered. Only certain people understand wrestling and the xenophobic, backward response from Britain is discouraging. Hire someone who can scout, train and know their ‘stuff’ This writer has a niche in wrestling, when your not too stubborn to realise it an provide for the country. There are many ways forward. Meetings are available on how to push this forward. Do get in touch, I am on Twitter, as you may already know. Cheers.

Hungary hammered home the 4 man Kayak, riding a successful 1.30.827 across the waves of Eton Dorney. Germany came in second to Belarus at third for medal celebrations. 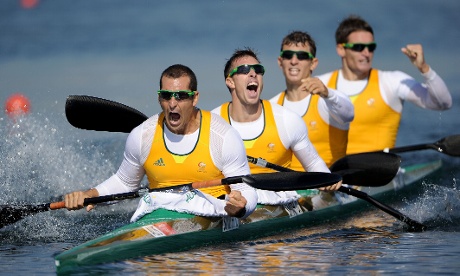 R-oar-ing to the finish line for gold 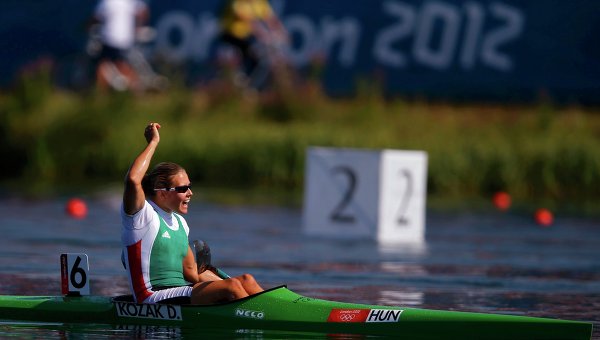 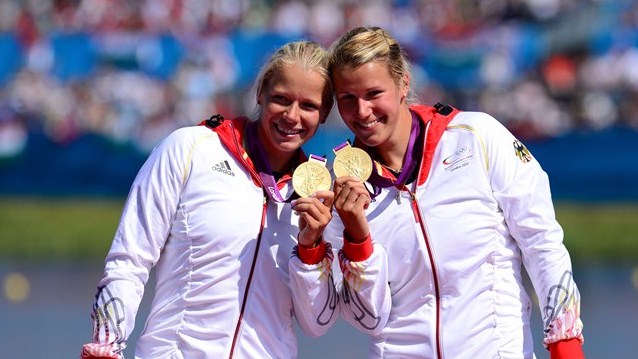 Women’s Double Kayak had Tina Dietze and Franziska Weber enter a speedy performance for Germany, earning gold. Natasa Douchev-Janics and Katalin Kovacs did Hungary proud once more with silver as Poland rode to bronze, with Beata Mikolajczyk and Karoline Naja. 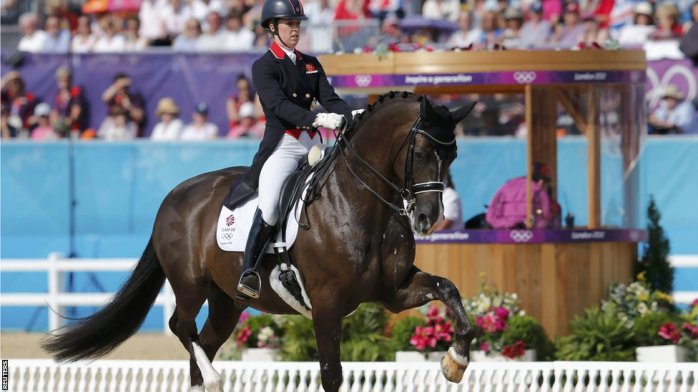 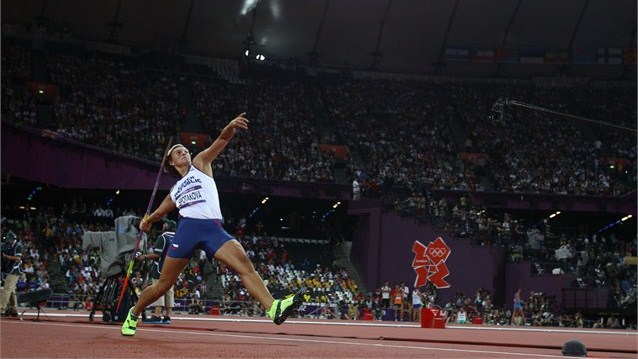 Barbora Spotakova launched the Javelin a mammoth 69.55 to take the gold home to Czech Republic. Christine Obergfoll fell short on 65.16 as fellow countryman Linda Stahl spearheaded a bronze medal to Germany, also at 64.91.

David Lekuta Rushida put in an expert performance in the 800m setting a new World record at 1.40.91 for Kenya. Botswana crossed the line in second with 1.41.73 as bronze went to Timothy Kitum joining Kenya in further celebrations for medal acquisition.

Germany beat Australia in the semis to travel on to finals.

Netherlands took on Great Britain in terrible scenes for the game, where formation was a factor and defence was poor. The Goalkeeper continually attempted to attack for the ball. The job of keeper is to ‘keep’ the ball out of the goal by defending it, not chasing for it. You need to stand and attempt to block. The goalie made numerous attempts to tackle for the ball in unfocused attempts as pot luck. The Danes dashed around and dropped numerous balls in the net as a result, thrashing opposition 9-2, as Team GB ended with a corner shot and excellent goal to retaliate, but too late towards the end whistle. Britain still have the opportunity to play for the bronze medal. They didn’t let the country down, per say, though their formation was all over the place, despite their efforts. 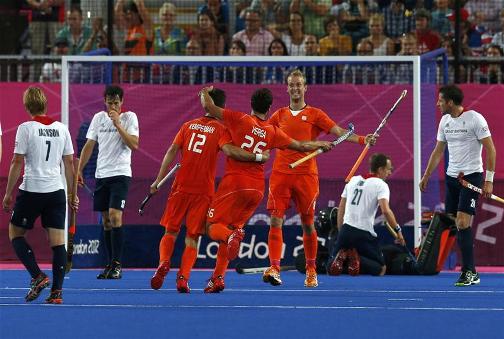