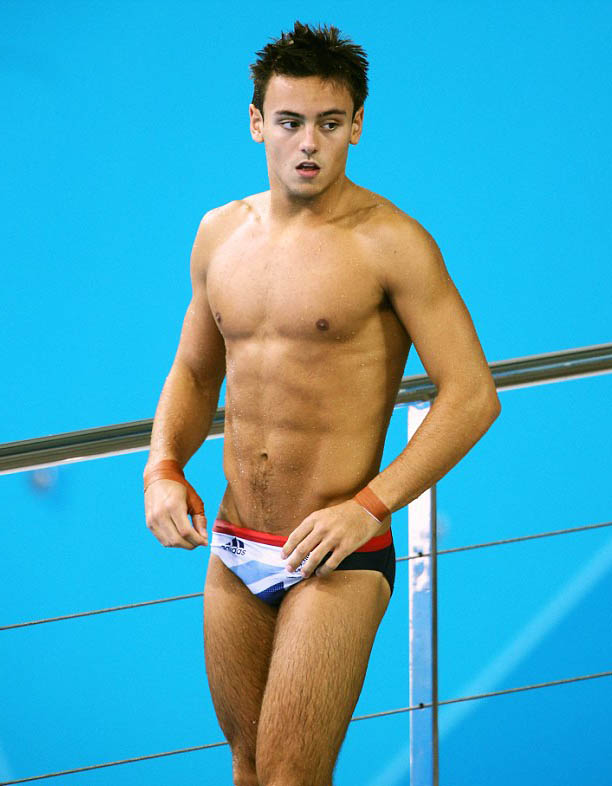 It was encouraging to see FINA take our concerns seriously, as markings seemed to change credibly, however the question would be how long would it be maintained for? 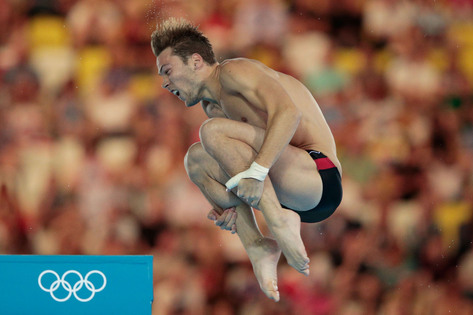 Round 1 of the dives were very accurate, as Riley McCormack of Canada launched the proceedings, with a 3.0 difficulty earning a valid 8.5 score. Cuban Jose Antonio Guerra also gained an 8.5 score with the same difficulty, which was slightly worse when legs entered the water swivelled to the left.

The majority of the dives were consistent, though when Tom Daley dived for Team GB, cameras in the audience were flashed by anticipating fans which caused a distraction. The flash photography, which is banned when performers are diving caused Tom and the coach to ask for a re-dive. The official rightfully agreed, and an announcement to the audience was conducted. 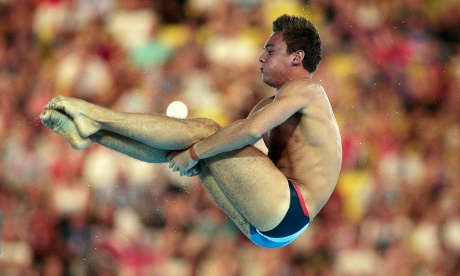 Is nothing sacred? You are there in the aquatic center witnessing the action live, be grateful to have that, there is no need to take pictures as well as the disgracious abundance to break rules costing all the competition for any competitor. Should throw them out next time.

Daley, David Boudia and Martin Wolfram ended the round highly, with the Chinese competitors, Lin Yue and Qiu Bo. 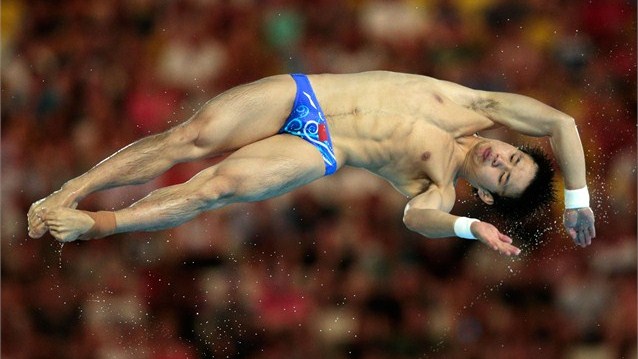 Round two had competent dives until the last three diver’s caused a mix. David Boudia earned 9.0 which should have had 9.5 as an excellent dive came through, with a minimal glitch not enough to be a 10. Lin Yue earned 9.5 which was at least a 9.0 with curving’s towards fall in, creating bubbles underneath, and Qiu Bo’s legs were way off into the water entry with them arched over, and gained a 9.0 which should have seen 8.5 minimal.

Lin Yue had some good dives when it counted

Oleksandr Bondar fell back onto his ankles in round three rolling back onto the water with his feet on entry and scored two 7.5’s and an 8.0 which should have been 7.0 – 7.5.

Sascha Klein was unfortunate with some flapjack, saucepan arched legs at a 3.5 difficulty earning 6 and 6.5’s in a trying attempt.

Victor Minibaev was way too out and diagonally extended when flying down to the water which was marked at a disbelievable 9.0 which was a roughly 8.0 score. 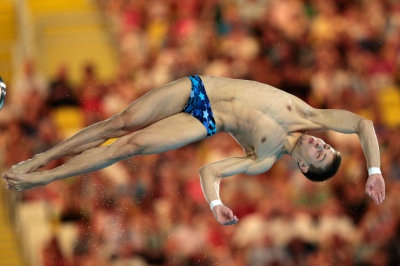 Boudia dived to 9.0’s in a near perfect splash, which should have been 9.5.

Lin Yue entered diagonally to gain 8.5 as Bo had flung his legs and had awkward backward entry as well as his head too close to the board which usually results in a penalty which the judges “missed.” Clearly we can say they missed it in the spur of the moment as an excuse, though was clear violation that they saw it and chose not to reprimand. Disgraceful. Bo scored two 9.5’s and one 9.0.

Round four Nicholas McCrory scored an 8.0 which should have been roughly 7.5 after a mass sviwel bend entry.

Daley had a very good dive into the water scoring two 9’s and one 8.5 which should have seen 9.5’s.

Lin Yue had a disastrous drop which was rightfully marked at 6.0’s and 6.5. Qiu Bo entered the water with a coathanger legged mess which scored 9.0 and two 8.5’s which should have amounted to 8.0’s.

Round five had a great dive from Mexican Ivan Garcia Navarro earning 9.0’s, though Bondar paused in the air and hyper extended his legs, pushing his knees out before plunging into the water, scoring a rightful 5.0 and two 6.0’s, however Cuban Jose had his knees out, as dropped into the water trying to push them then hurled back on his flipped feet, similar to Olek’s mistake, though scored two 8.5’s and an 8.0.

Minibaev then had awkward bend drops with a swivel back an froth reminiscent of a seesaw scored 8.5’s instead of 8.0s.

Wolfram tore his shoulder on the last dive prior, but wilfully continued on to make his country proud.

Lin Yue faltered slightly with legs off in rotation and a bad entry. He scored 8.5’s across the board, which was 8.0’s at best.

World champion Qiu Bo had a seemingly good dive until before water entry in the dive into position, slightly bent out. 8.5’s were given, which was 8.0 – 8.5 worthy for his blunder.

After the rankings Daley was first with 466.20 to Boudia and Bo’s tied score of 466.05 only a margin separating them as the top three.

The final dive loomed. Bondar gained 6.0’s in a seemingly pity marking which was worthy of 5-5.5’s. Legs were mid-air crossover calamities embodied by the splash dive. ‘Baev scored 8.5 which was 8.0 ideally.

Despair came for Martin Wolfram as he ripped his shoulder in the round prior and continued on to dive in honour for Germany, however painfully irritated the predicament, off in rotations, which probably should have seen him withdraw from the contest, despite not wishing to, as he was too far behind to contend. He attempted a 3.7 difficulty scoring 8 and two 8.5’s for his efforts.

Daley followed with a faultless, perfect dive, with slight bend, to earn two 9’s and a 9.5 which was worthy of all 9.5’s in blatant marking down.

David Boudia followed with an almost perfect dive though a tad off with leg entry, earning 9.5’s which were really 9.0’s at best.

Qiu Bo was over in mid-air and missed fluidity on a 3.6 difficulty, scoring 9.0’s to bump his place to second, after losing to Boudia. 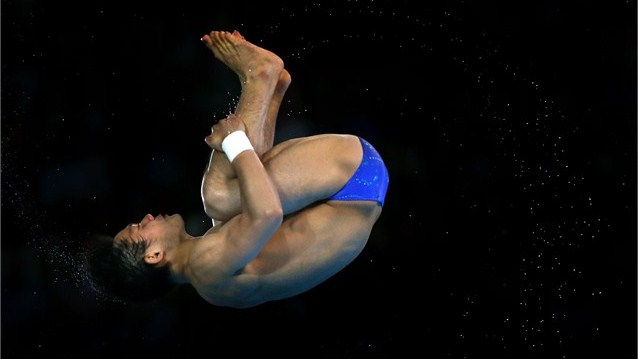 Tom Daley won the bronze medal in a joyous celebration, being thrown into the pool by his team and coaches. Boudia was thrilled as Bo was dismayed.

The event began marking fairly competently, but then instantly reverted after the next few rounds to old habits. Whether “in awe” of Bo’s previous talents, which would constitute as bias, or whether it was some shady politics going on behind the scenes, or just stubborn attitudes of the ‘panel’ or who they believe should win a medal is unfathomable. They should all be struck off, and replaced if FINA are to hold any scope with its reputation, as this has been highly detrimental to the profession and the Olympic sport.

Even defending champ Matthew Mitchum of Australia was eliminated, even though he had better dives than some who did qualify. He was later seen in the crowd in joyous fashion, with a smiley face drawn onto his chest with cheeky tongue pointed out. 😛

One devisery we can take from this is that something untoward is in the water at a cataclysmic standing, where officials need to harpoon the harboured hypocrisy because it is running their integrity and becoming highly debatable in potentially biased parameters that must be recognised and removed. It damages, nations, professionalism and the will of the sport, never mind the Olympics. It applies to anyone and not because it is country based, as before, we re-iterate, if sport is to be fair and contrasting then foul play potentially seen must be investigated and mentioned. If you were on the over side, would you be so quiet? 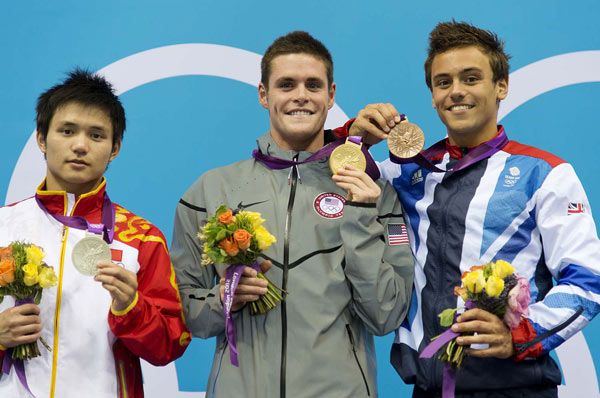 Gold and silver can be debated by Daley and Boudia. We have previously stated that Boudia yesterday was one to ascend. It is in this writer’s credible thought process that Daley should have gained gold and Boudia silver, slightly but Daley’s last dive proved higher ranking than Boudia’s and in a level of competition, there has to be a mentioned contrast. Again both could be debated back and forth, but clear these two were the top two, and China’s Bo should have held bronze, yet gained silver. While almost every writer will take a defiance based on nationality, there is none here with myself. In order to have a free press and a fair, genuine and defined sporting outlook with morals and sporting achievement, these are valid claims to make. We have no bias when we write, check our previous results, where we have tirelessly put many nations forward credibly, based on their achievement alone in the games. Most press outlets, if not all have had bias towards concentrating on their nations and ignoring others from smaller sports or unknown/politically unmentionable countries. We have done none of this. Nevertheless, we do not wish to detract from Boudia’s victory as was thoroughly deserved with some expert dives on the day. Congrats on a great competition to the end! 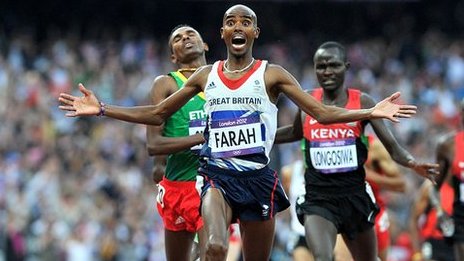 Mo Farah became the seventh man to sensationally win the 5,000m and the 10,000m at the same Olympic’s gaining the victory for Great Britain in an tense and terrific track trot, crossing the finishing line at 13:41.66. Dejen Gebremeskel (Ethiopia) and Thomas Pkemei Longosiwa (Kenya) took silver and bronze.

The four man relay runners were unleashed from their starting blocks where Jamaica and the United States (Justin Gatlin, Tyson Gay and Ryan Bailey) had a chase on their hands, though Jamaica (Nesta Carter, Michael Frater and Yohan ‘The Beast’ Blake) strode home with the baton in Usain Bolt’s firm hands to charge home another victorious gold. Former athlete Michael Johnson felt it may have been a mistake to put Bailey in lane three, as needing to gain an upper advantageous lead before Bolt was launched to stand a chance of winning. We would agree. Jamaica entered a new world record at 36.84 as United States raced a 37.04. Trinidad and Tobago came third with 38.12.

Bolt payed ‘omage to the “Mo-Bot” from Mo Farah

Mo keeping up with the Bolt-bot 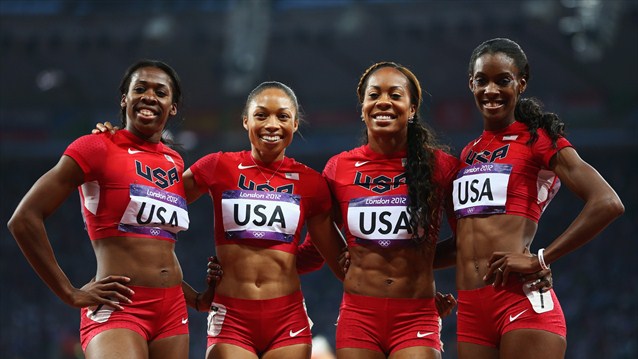 The result was slightly reversed for the females as Team USA strode home to a 3.16.87 time above Russia by four seconds to win the gold. Bronze went to Jamaica’s ladies in a close battle for second at 3.20.23 to 3.20.95. 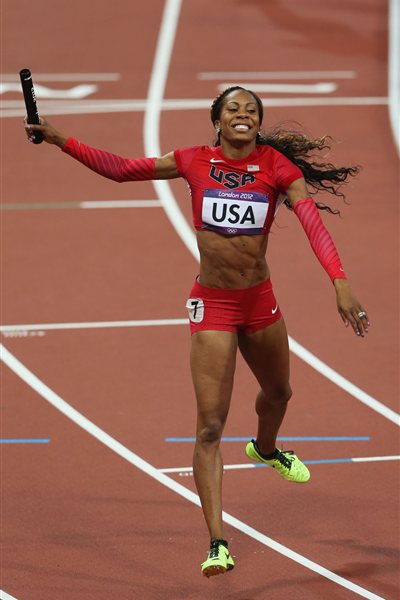 Keshorn Walcott launched the farthest distance of 84.58 to fling home a gold medal for Trinidad and Tobago, while silver was claimed by Ukraine’s Oleksandr Pyatnytsya at a score of 84.51. 84.12 spiked a bronze for Antti Ruuskanen for Finland.

Anna Chicherova earned 2.05 and a gold for Russia to scale past Brigetta Barrett on 2.03 who couldn’t surmount her rival. Russia also rallied a bronze with Svetlana Shkolina on 2.03 also. 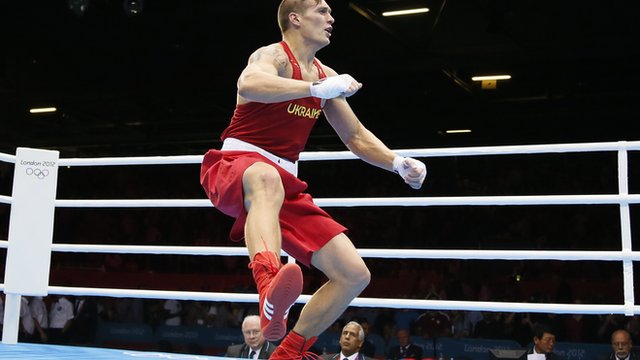 Time to invite Dhalsim of Street Fighter for a dance!

Shiming Zou won gold for China after Thailand’s Kaeo Pongprayoon was thought to have won the medal. Zou took gold for China as officlas made the call, putting silver around Kaeo. Paddy Barnes of Ireland and David Ayrapetyan tied for bronze. 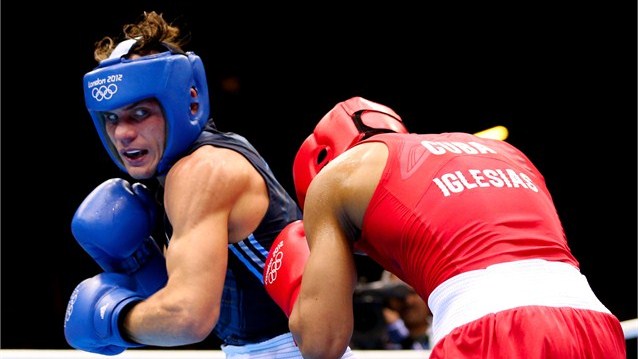 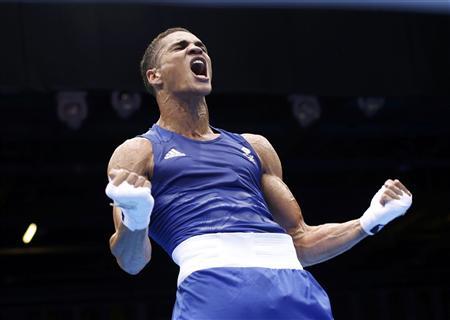 Russia’s Evgeniya Kaneava retained the Rhythmic Gymnastics with a 116.900 mark to earn gold over challengers  Belarus. 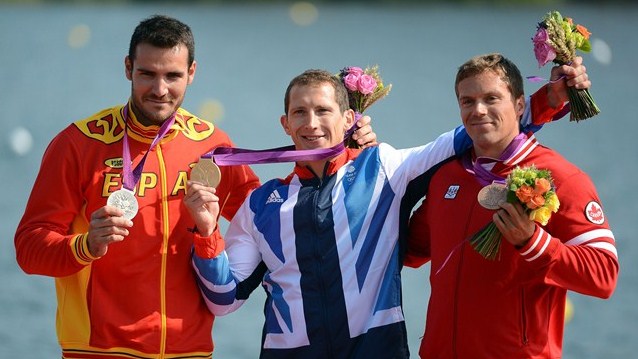 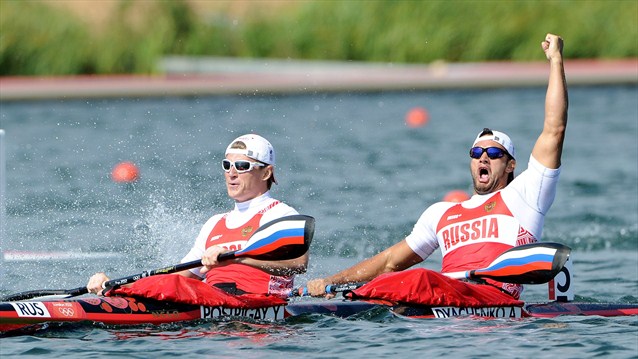 Russia stormed to first with Alexander Dyachenko and Yury Postrigay to defeat Belarus’s Vadzim Makhneu and Raman Piatrushenka who inched passed Great Britain towards the end after Team GB held second for the vast majority. Jon Schofield and Liam Heath picked up bronze.

Men’s Hockey saw Great Britain lose to Australia 3-1 bowing out of the challenge to win bronze, which Australia secured. 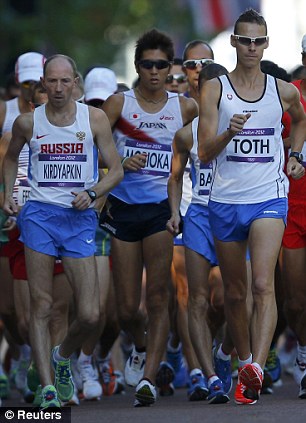 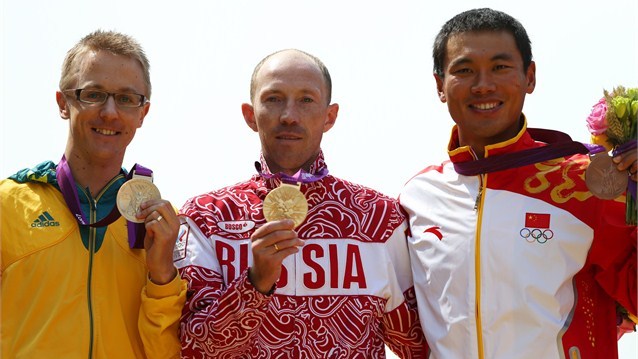 Russian fever taking over had another double whammy of wins as Elena Lashmanova took gold at 1.25.02 as countryman Olga Kaniskina had a time of 1.25.09. Shenjie Qieyang had 1.25.16 to take bronze for China.

The Czech Republic bested China to win gold, over the London 2012 course, including horse riding, fencing, pistol targeting and racing to a finish. Hungary followed in third to get the bronze.

US dropped France for gold as Australia hooped past Russia for bronze.

It wasn’t plain Women’s Sailing for Australia in the Elliot class as one man went overboard, allowing Spain to swiftly pass to claim the gold medal.

Artur Taymazov won the 120kg freestyle grapple over David Modzmanashvili of Georgia to earn gold for Uzbekistan. Bilyal Makhov of Russia and Komei Ghasemi of Iran both won bronze. 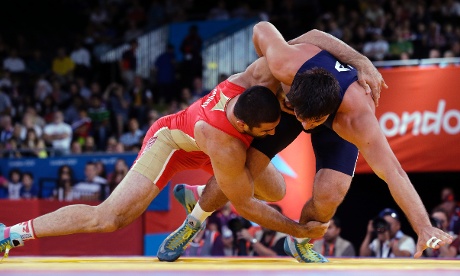 Bilyal Makhov of Russia competes against Jamaladdin Magomedov of Azerbaijan 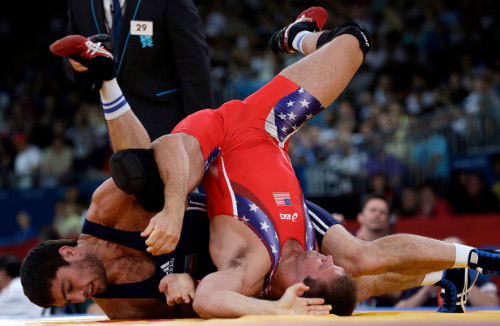 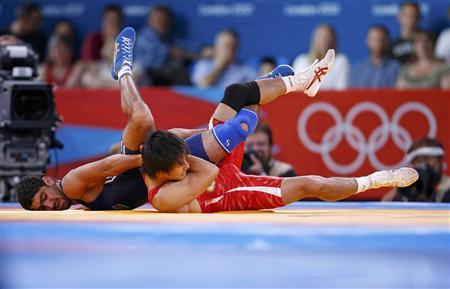 Carlo Molfetta won Italy their gold in the +80 standings as Milica Mandic won the +67 Women’s gold for Serbia.